Lilium, the Munich-based startup developing a revolutionary on-demand air taxi service, today revealed its new five-seater air taxi prototype for the first time. The unveiling of the new Lilium Jet came as the all-electric aircraft completed its maiden flight in the skies over Germany earlier this month. 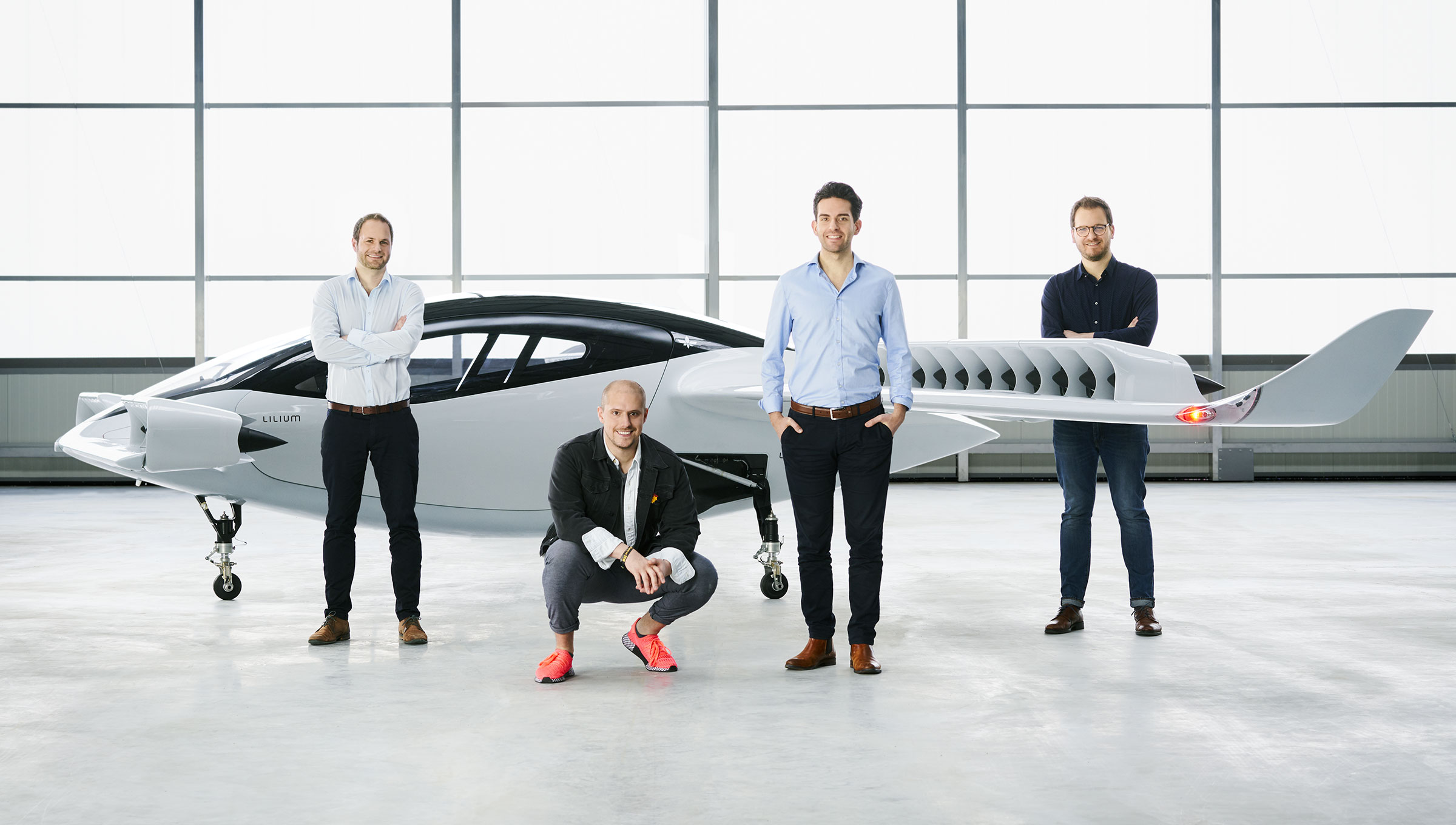 Munich 16 May 2019: Lilium, the Munich-based startup developing a revolutionary on- demand air taxi service, today revealed its new five-seater air taxi prototype for the first time. The unveiling of the new Lilium Jet came as the all-electric aircraft completed its maiden flight in the skies over Germany earlier this month.

The full-scale, full-weight prototype is powered by 36 all-electric jet engines that allow it to take-off and land vertically, while achieving remarkably efficient horizontal, or cruise, flight. The simplicity of the aircraft design, with no tail, no rudder, no propellers, no gearbox and only one moving part in the engine not only contributes to the safety and affordability of the aircraft, but it has also allowed the design team to focus their efforts on creating a magical customer experience in the cabin, from panoramic windows to gull-wing doors.

Celebrating the landmark, Daniel Wiegand, co-founder and CEO, said: “Today we are taking another huge step towards making urban air mobility a reality. In less than two years we have been able to design, build and successfully fly an aircraft that will serve as our template for mass production. Moving from two to five seats was always our ambition as it enables us to open up the skies to many more travelers. Whether its friends or families flying together or business travelers ride-sharing into the city, having five seats delivers an economy of scale you just can’t achieve with two. The Lilium Jet itself is beautiful and we were thrilled to see it take to the skies for the first time. With the perfect balance of range and speed, our aircraft has the potential to positively impact the way people choose to live and travel, all over the world.”

With a top speed of 300 km/h and a range of 300km, the Lilium Jet is capable of completing much longer journeys than the majority of its competitors. This is, in part, thanks to the fixed wing design of the aircraft. While drone-based aircraft consume much of their energy keep- ing an aircraft in the air, the Lilium Jet can rely on the lift generated by the fixed wing to do this, meaning it will require less than ten percent of its maximum 2000 horsepower during cruise flight. This efficiency, which is comparable to the energy usage of an electric car over the same distance, means the aircraft would not just be capable of connecting suburbs to city centers and airports to main train stations, but would also deliver affordable high-speed connections across entire regions.

The Lilium Jet first took to the air at 08.03 local time on 4th May 2019, having completed extensive ground testing at Lilium’s HQ in Munich, Germany. The prototype aircraft, which is controlled remotely from the ground, has since begun a rigorous flight test campaign that will prove its capability and lay the foundations for certification of the aircraft to safety standards comparable to those of large commercial aircraft.

Commenting on the successful first flight, Leandro Bigarella, Head of Flight Test, said: “While a maiden flight is always a moment of truth for a business, the Lilium Jet performed exactly as expected and responded well to our inputs. Our flight test program will now continue with increasingly complex maneuvers as we look towards our next big goal of achieving transition flight, which is when the aircraft moves seamlessly from vertical to horizontal flight.”

Lilium plans to manufacture and operate the Lilium Jet as part of a revolutionary on-demand air taxi service. At the push of a button, passengers will be able to use the Lilium app to locate their nearest landing pad and plan their journey with ease. Choosing from a network of pads across cities and regions, passengers will enjoy journeys that are comparable in price with a taxi, yet four times faster. Lilium expects to be fully-operational in various cities around the world by 2025, although trial services will start earlier than this in several locations.

Commenting on Lilium’s vision for urban air mobility, Wiegand added: “We dream of a world where anyone can fly wherever they want, whenever they want. We’ve invested a tremendous amount of thought and care into designing an aircraft and a service that will let us deliver this, meeting society’s demands for urban air travel that is quiet, safe and environ- mentally positive. Getting to this point has meant tackling some of aerospace’s greatest challenges, but now we’re here we can focus on bringing our vision to life and connecting communities in ways they have never been connected before. Whether it’s reducing the need for investment in ground-based infrastructure like road or rail, or opening up new areas to economic opportunities, we believe that urban air mobility has the potential to be a remarkable force for good in society and we look forward to working across our sector to achieve this.”

The latest five-seater Lilium Jet builds on the successful flight testing of a two-seater prototype in 2017. The two-seater prototype provided proof of concept for Lilium’s signature transition flight maneuver, where the aircraft shifts from vertical to horizontal flight, and laid the groundwork for today’s prototype.

The five-seater prototype will now enter a rigorous flight test campaign that will see it demonstrate its full range of capabilities. 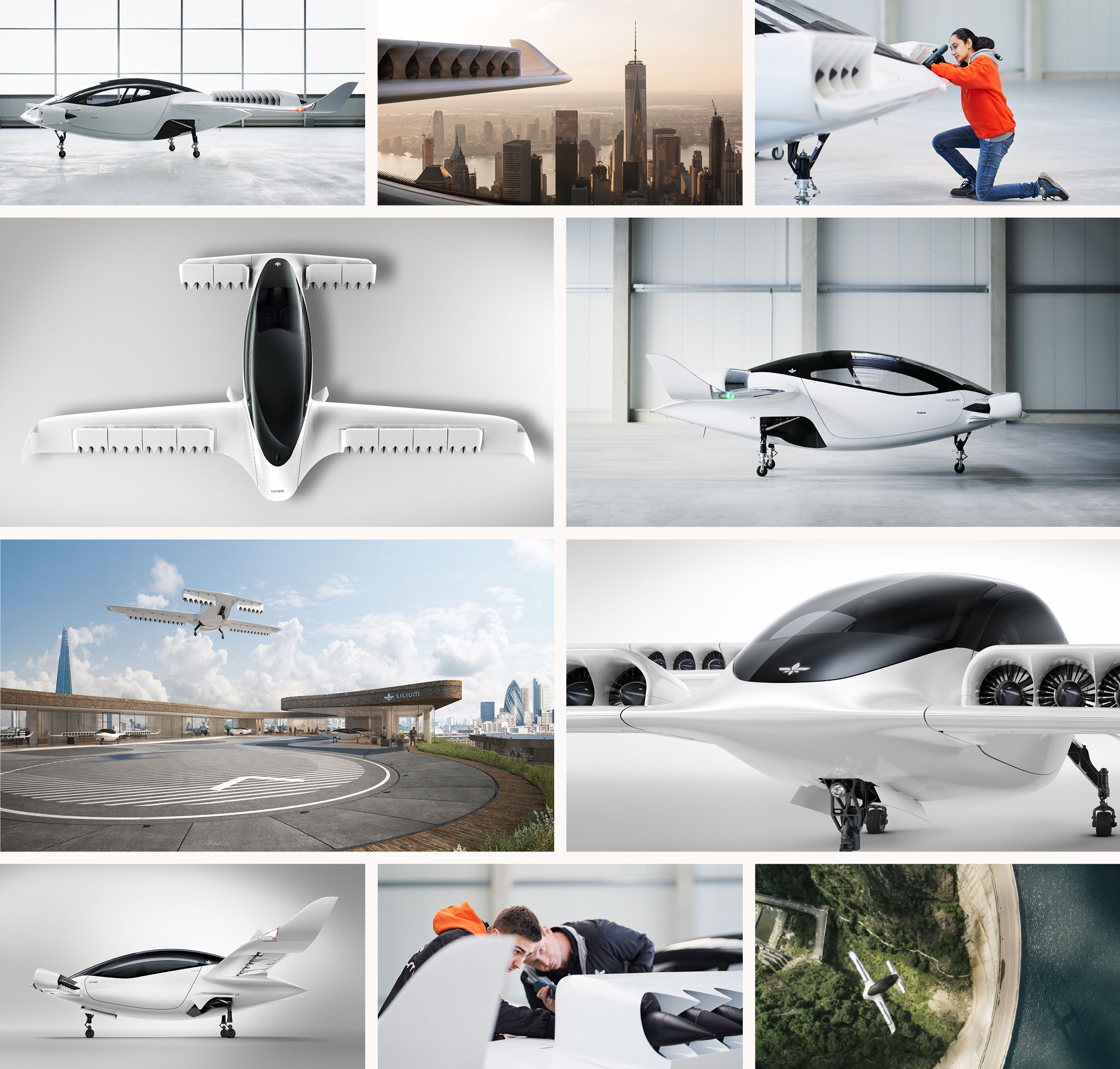 Lilium GmbH is a Munich-based startup developing a revolutionary on-demand air mobility service. To give wings to its vision of a world where anyone can fly anywhere, anytime, it has designed and prototyped a brand new form of aircraft that will enable it to deliver journeys that are four times faster than a taxi, yet competitive in price. Manufacturing and operating the Lilium Jet, a five-seater, fully-electric aircraft that can take-off and land vertically (eVTOL), will enable it to address a trillion-dollar market opportunity that will not only change the way people choose to live and travel but will also connect communities at a fraction of the cost of conventional high-speed infrastructure such as road and rail.

Images and video footage of the new Lilium Jet are available for download at Lilium’s new website www.lilium.com

You can find out more about how the Lilium Jet flies by reading this BLOG POST.

You can find out more about our four co-founders by reading this BLOG POST.

Lilium spokespeople will be available for interview in English or German all day on May 16th. Please use the contact details below.

Patrick Nathen, co-founder, and Arnd Müller, VP Marketing, will hold a media briefing on this topic in the Media Lounge at the VivaTech conference in Paris at 08.15 CEST on 16th May. Access is only available to attendees of the conference.

For enquiries in English:

An introduction to the Lilium Jet

Meet the Founders of Lilium