Why we don’t plan to operate flights under 20km, and why that’s a good thing.

The idea of ‘urban air mobility’ is pretty well ingrained in most people’s minds. It’s futuristic flying cars that hop around a city, perhaps taking off from a garden, before stopping at the local shops and then dropping the kids off at school.

Of course, the reality is very different.

Taking a short hop from Lower Manhattan to Grand Central Station in New York, or from the English Garden in Munich to the main station, is not only impractical (you’d need hundreds of landing pads in one city) but it won’t actually save you any time as you’ll likely need to travel to and from the vertiport as well as check-in for your journey.

Instead, we set out to do something different. Different from what most people expect from electric air mobility and different from the vast majority of our competitors.

With a range of up to 300km (186 miles), we’ll be able to focus on connecting entire regions with high-speed transport, rather than trying to persuade you that we’re quicker than a crosstown journey on an underground train or bike.

In fact, contrary to the idea of ‘urban air taxis’ we think there will only ever be a handful of routes in our network that are shorter than 20km (12 miles).

That might sound surprising, so I’ve picked two examples to illustrate how electric VTOL flight might be deployed most effectively.

Switzerland: a network in the heart of Europe

Switzerland is blessed with excellent transport connections, a punctual train service and many beautiful places to go. And yet, even with world-class infrastructure, it still takes considerably longer than expected to reach these destinations from my home town of Zurich.

Traveling with the all-electric Lilium Jet would allow me and others in Zurich to complete these journeys significantly faster and at a price that would be comparable to a first-class train ticket at launch, and cheaper a few years into operations.

But the opportunity doesn’t stop there. Because an air mobility service doesn’t require expensive land-based infrastructure like roads or rails connecting each point, we can rapidly create a network with hundreds, if not thousands of route options, linking up major towns and cities to create significant economic impact, better land use, and increased access to industry, culture and, of course, nature.

A system with only 20 landing sites would create around 200 potential routes and 10,000km of high speed connectivity (assuming 50km distance between sites). That’s three times the entire French high speed TGV rail network for a fraction of the cost.

And since we don’t have to build tracks that can easily cost more than $20m+ per kilometer, we can connect smaller communities too, adapting the frequency of connection to match the demand.

By adapting existing infrastructure like airports, heliports, or even the roof of a parking garage, there’s a genuine opportunity to implement a network that could look like this, in less than five years. 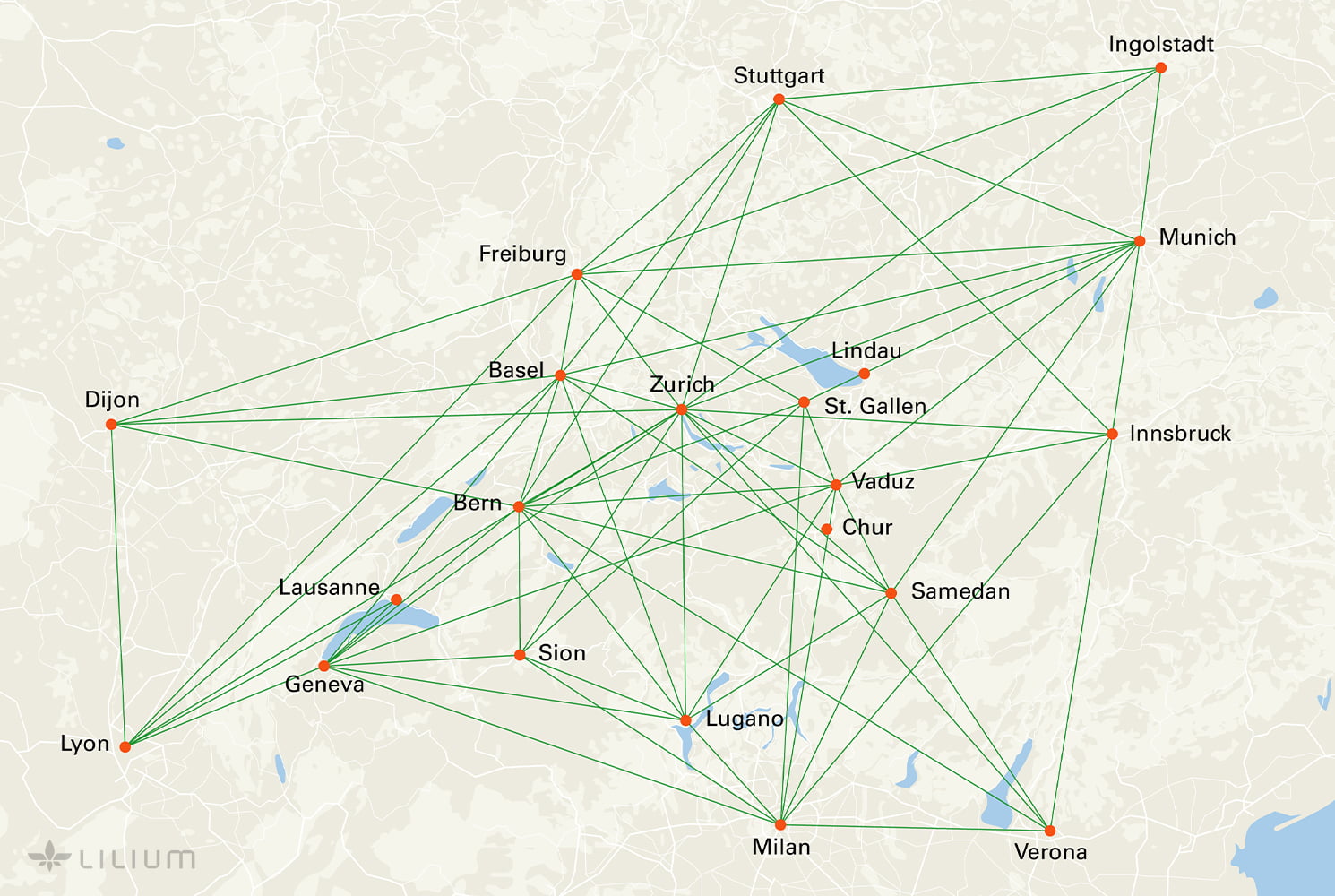 California: From the Bay to further away

The same argument applies to San Francisco and the Bay Area. While it’s known for its economic activity, its matchless creativity and for being surrounded by natural beauty, it’s also a large urban area with many centers, plagued by heavy traffic and high house prices.

What if we could change that, with high speed, all-electric travel? Today, traveling in and around the Bay Area is a challenge, but a Lilium service has the potential to improve journey times significantly. Assuming you start your journey somewhere around the Embarcadero, travel times could look something like this:

Or maybe you want to escape to Lake Tahoe for a long weekend? That would be less than an hour on a Lilium Jet, at a cost of around $250 at launch and less in the near future. It might not be something you’d do every weekend, but saving you three hours each way might well make it worthwhile for an occasional trip.

There are many sites that could host a vertiport in downtown San Francisco, ranging from piers to parking lots and the rooftops of existing transport hubs. And, with a regional approach to travel, we could effectively service the entire downtown area using just one or two pads.

In the Valley we could see vertiports providing high-speed connections to homes and corporate campuses, using shuttles buses, ride-hailing and micro-mobility for last mile travel. These could be placed alongside highways or next to the Bay, allowing us to minimize any ground impact by routing flights over the water, or above busy traffic arteries. 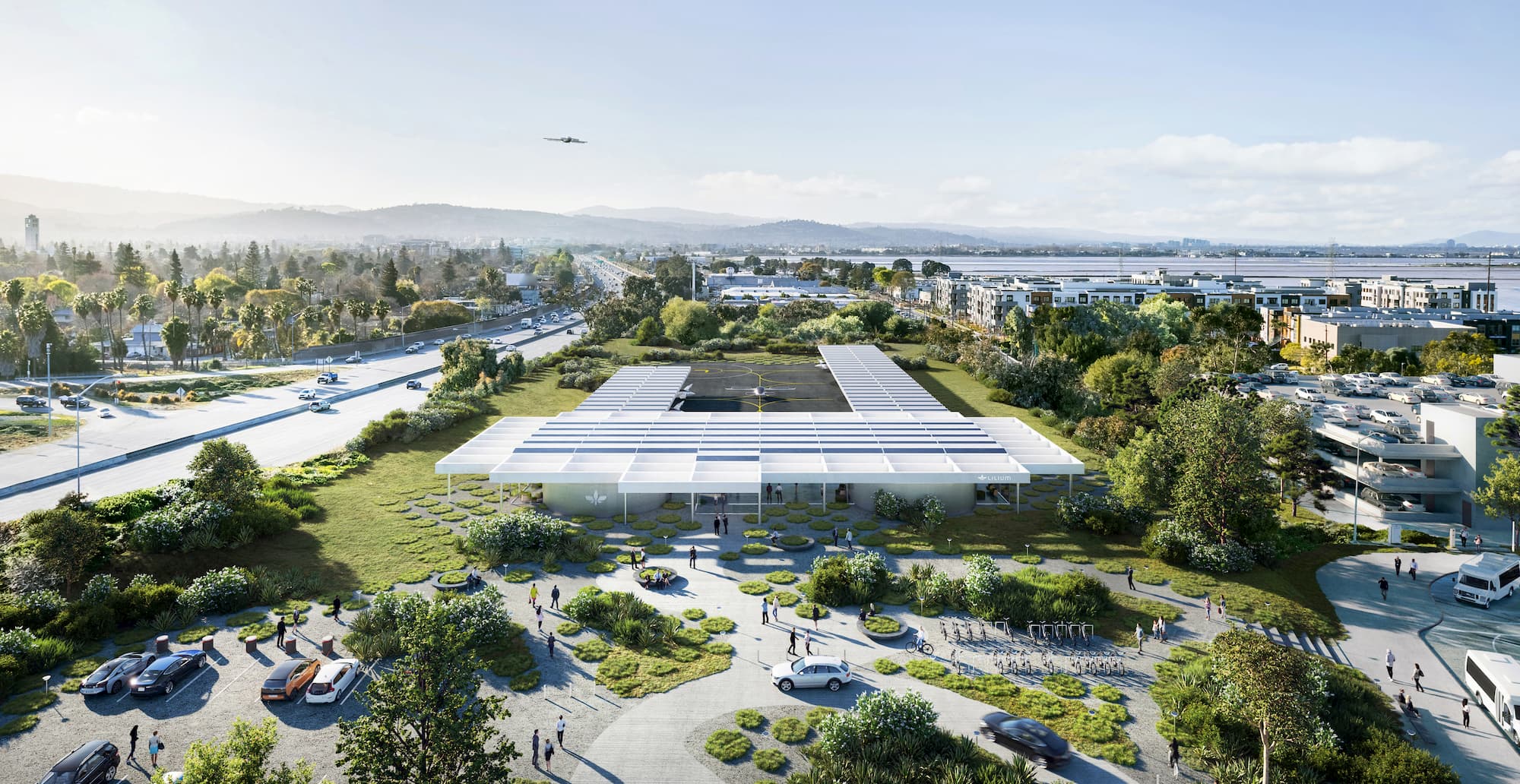 An example of what a high-throughput vertiport, with intermodal last-mile connectivity, could look like in Palo Alto, CA

Our vision isn’t just about one city though. We want to create a regional network that connects smaller towns and cities and takes the pressure off our highly-congested cities, helping to unlock billions of dollars of land value through more distributed growth, in turn improving the way we live. 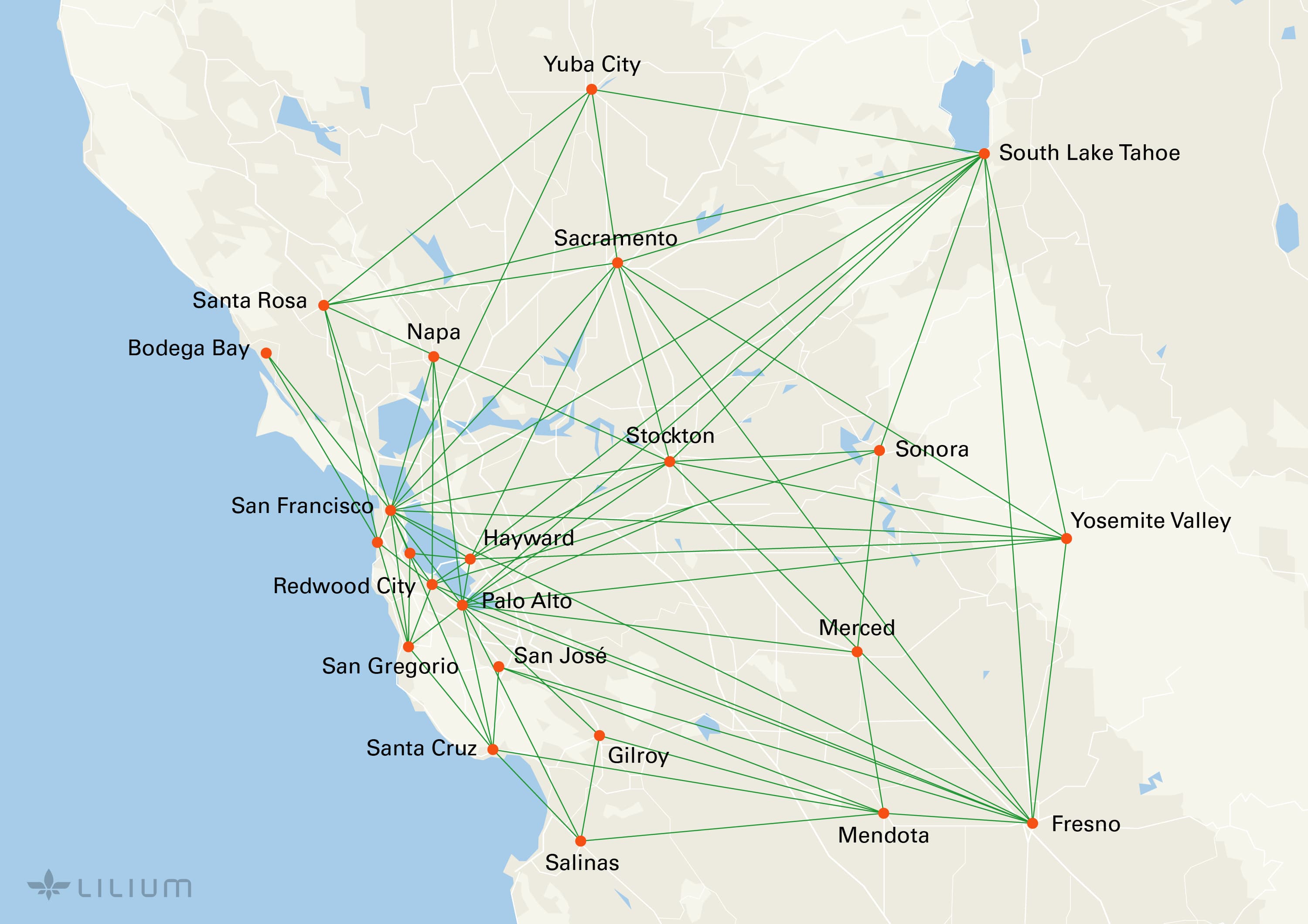 A recent study showed that less than 750km (466 miles) of high speed connectivity could generate economic opportunities worth hundreds of billions of dollars. The prospective network map above delivers more than 10 times that amount of connectivity, with throughput for millions of passengers each year, and yet would only cost in the order of $250 to $350 million to construct - a fraction of the tens of billions it typically costs to build a few hundred kilometers of high speed ground transportation tracks as we don’t need the land and material.

Bringing this vision to life means parking some of the more exotic ideas about what this form of transport might look like and instead focusing on making it affordable, achievable, accessible and acceptable.

We have developed a modular and affordable approach to infrastructure that will enable networks to scale fast. Our detailed costings show that a 5,000 sqm vertiport (53.8k sqft), with one take off and landing space and seven parking bays, could be built at ground level for as little as $10m, and would be capable of handling 1-1.5 million passengers each year.

In many cases we could rapidly upgrade the existing infrastructure at smaller, regional airports, creating a connection for even less.

And, by ruling out flights under 20km, we avoid needing to traverse our cities in every direction, meaning we can deploy the Lilium service in the least intrusive way for communities, choosing our vertiport locations carefully to minimize any impact.

An example of how existing transport corridors, such as existing rail tracks, could be used as routes for Lilium flights, helping to minimize noise footprint at ground level . Credit: geodata © swisstopo

While there is still work to be done to define landing regimes and air traffic management that allow for a higher frequency of flights, you can read more about our proposed service on our website, while our approach to infrastructure is detailed here. We’ll also be sharing more information in the coming months about how our unique aircraft concept can deliver a low noise footprint, allowing it to access built-up areas without adding to local noise levels.

‘Tesla of the sky’ aims to transform transport

Carbon composites and the Lilium Jet