An introduction to the Lilium Jet

What is the Lilium Jet? It looks quite different from other aircraft…?

Nothing like the Lilium Jet has ever existed before. It’s a five-seater, all-electric, vertical take-off and landing tilt jet. Some people refer to aircraft like these as eVTOL (electric Vertical Take Off and Landing).

What are its main features?

The canard wings each have two flaps and the main wings have four. We mount three of our pioneering all-electric jet engines on each flap, allowing them to pivot and change the direction of the thrust they create. The flaps can each move independently. 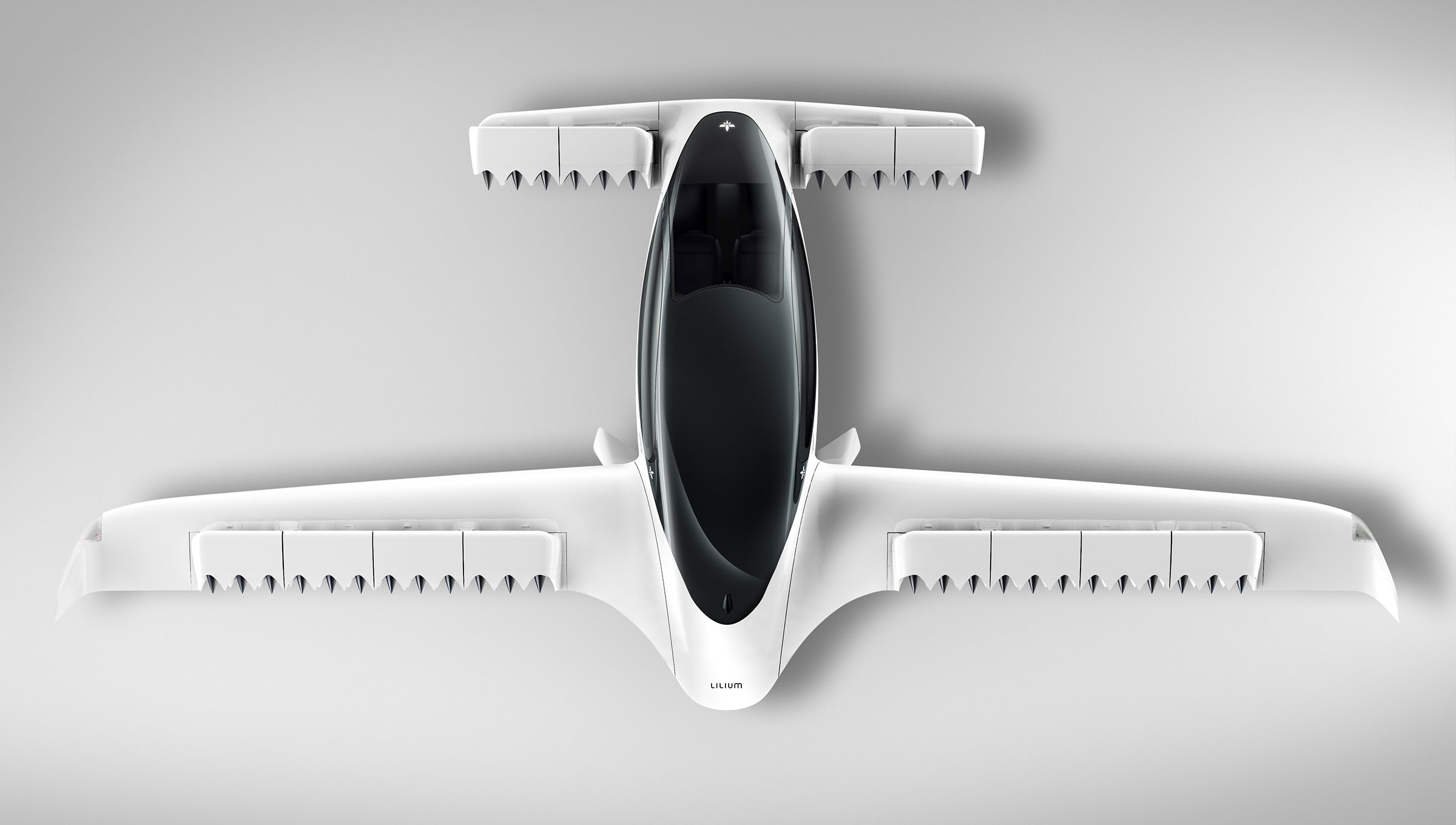 Why do you have that smaller wing at the front?

We didn’t want to make an aircraft with just one main wing because it would have to sit in the center of the aircraft which would make accessing the Lilium Jet difficult for passengers. It would also mean making the aircraft longer as you would have to add a conventional aircraft tail to maintain stability, which isn’t great from a weight or ground-maneuverability perspective.

Introducing a shorter, canard wing allows us to generate more lift and control the aircraft more effectively. While the overall efficiency of the aircraft is defined by its maximum span, it’s ok if you only reach this with one wing.

It looks like the aircraft is missing some important features like a tail, ailerons, rudder and an elevator?

When we designed the Lilium Jet we looked at more than 20 existing aircraft concepts but soon realized that none of them would deliver what we wanted. We were searching for levels of efficiency that were close to the limits of physics, delivered in the most simple way. So instead of tweaking an existing design, we chose to design something from scratch.

The result is the Lilium Jet which has no tail, no rudder, no oil circuits, no gearboxes, no variable pitch fan blades and only one moving part in the engines.

Our philosophy has always been that simplicity is key: it makes the aircraft more robust, it makes it safer, it makes it easier to maintain and it lowers the cost to certify, manufacture and operate the aircraft.

How do you balance a plane with no tail or ailerons?

It’s pretty simple –  The engine nacelles, the technical name for the engine casing, perform the function of aerodynamic control surfaces and act like the ailerons and elevator of a normal aircraft.

In pitch we control the balance with the canard wing, in roll we control with the main wing engine nacelles and in yaw we use the thrust of the engines to balance.

How is the Lilium Jet able to move both vertically and horizontally?
We use a concept called thrust vectoring, which is more commonly associated with space rockets and fighter jets. In space you can’t rely on flaps and ailerons to direct the aircraft as you’re in a vacuum. Instead, you change direction by adapting the angle of the thrust you generate.

The Lilium Jet works on a similar premise. As the engines move together with their nacelles, they perform the function of aerodynamic control surfaces, allowing us to direct and move the thrust.

Within a tenth of a second, we can change the rpm (revolutions per minute) and angle of each set of three engines allowing us to deliver a very smooth and very precise trajectory. This also contributes to us delivering a very smooth transition from vertical to horizontal flight as we have shown with our two-seater prototype. 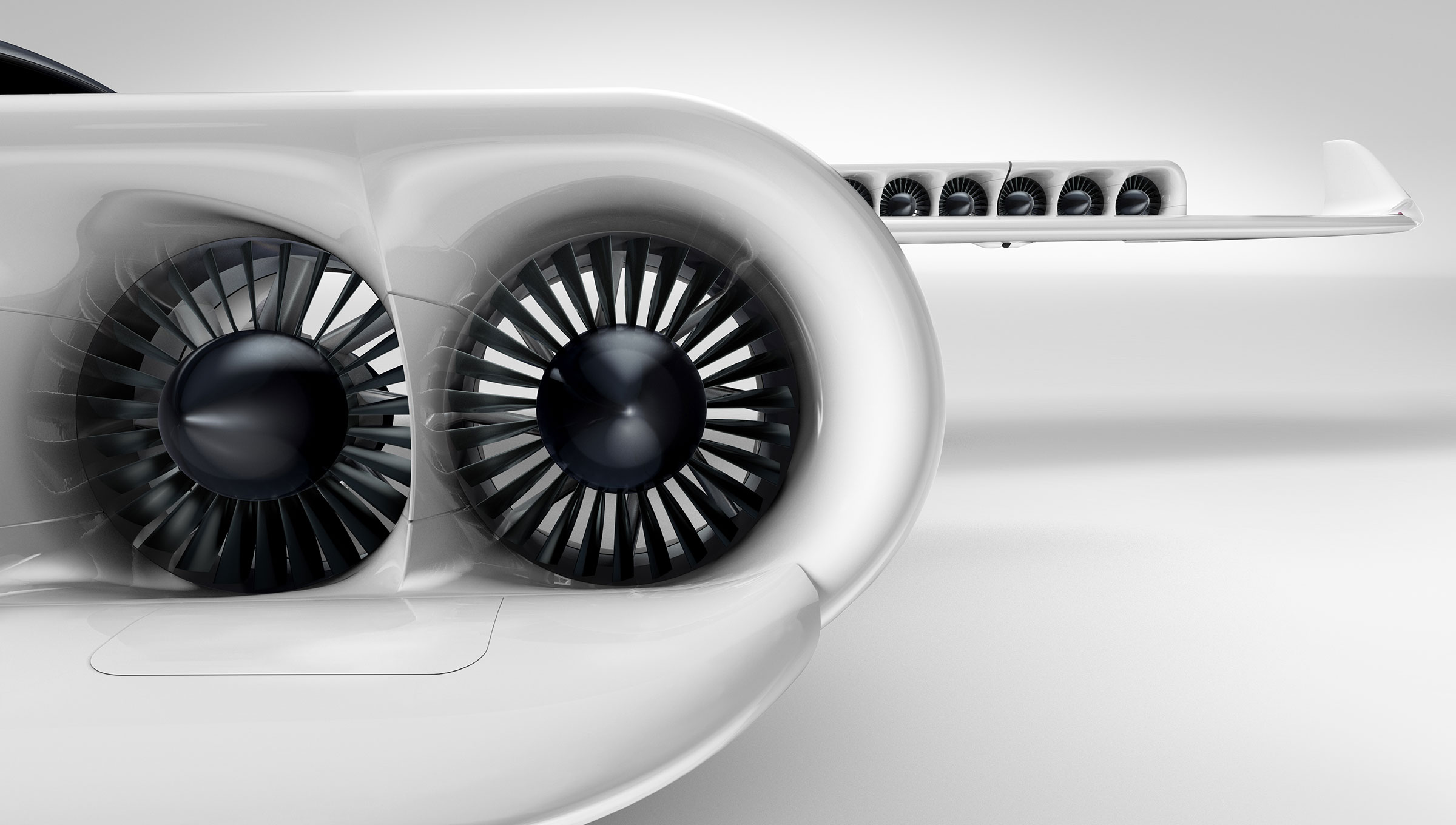 36 engines? What was wrong with two or four?

The increase in efficiency stems from integrating the engines into the wings. The engine nacelles are part of the wing and help create lift. This means we can reduce the surface of the wing and the associated drag, which is the friction generated when moving through air. Having more engines also allows you to distribute the power along the wing, generating further efficiency.

The increase in safety comes from redundancy. With 36 independent engines, we’re well covered in the very unlikely case that an engine fails.

Last but not least the manoeuvrability of an aircraft increases if you use smaller engines. The time taken to increase power (‘spin up’) or decrease power (‘spin down’) in a small engine is much less than that in a typical aircraft engine, meaning the Lilium Jet is able to respond much more rapidly to a control input. In fact, in the case of our own electric engines, which we’ve developed in house, they are capable of ‘spinning up’ from zero thrust to maximum thrust in less than one second!

Is it really possible to travel 300km on just one charge?

Yes, and we plan to use ‘off-the-shelf’ battery technology to achieve it. We can be confident in this range thanks to the efficiency of the Lilium Jet. Once we enter horizontal flight, which is the majority of flight, our fixed wings generate lift, which is basically free power. It means we only have to use around 10% of our possible engine power to maintain high-speed flight and can therefore go much further than other types of aircraft in this space.

Meet the Founders of Lilium